Can You Eat Cooked Ham When Pregnant?

Whether a pregnant woman can eat cooked ham or not is a very controversial topic as there are different opinions on this matter.

While pregnant there are many foods you’d be advised to give up on mainly because of your health and that of the baby. Some foods, especially uncooked ones, are top of the list of food to avoid during pregnancy. But right this moment you crave cooked ham and you are wondering if it is safe or unsafe for consumption.

Yes, you can eat cooked ham when pregnant. Cooked ham is not a bad idea as it has been thoroughly heated therefore there are no risks involved. Unlike precooked or raw ham that has listeria (a bacteria that causes listeriosis) cooked ham is considered safe especially when it is home-cooked.

A lot of expectant mums are wary of eating ham in general, which is good but when it comes to cooked ham, you shouldn’t worry about enjoying it as it poses no threat to you or your baby. But if you are still not quite convinced about it, continue reading, this article will throw more light on this topic.

Can You Eat Cooked Ham When Pregnant?

Don’t we all love ham? Pregnant or not, ham seems to be a lot of people’s favorite. But now you are expecting and some people have advised you to steer clear of ham, which must have sounded ridiculous at first because what harm can ham cause?

Well, you should avoid eating ham but should in case you have a strong craving for it, your best bet is cooked ham and I don’t just mean cooked I mean thoroughly cooked. Cooked ham (unlike the undercooked and the raw ones) is not dangerous to your health or that of the baby. It is nourishing and beneficial to you.

You should consider the homemade cooked ham as it is extremely safe for consumption. And while cooking the ham be sure to maintain good hygiene by washing your hands, washing the ham (even if it has been prepackaged), and leaving it to heat for a longer period to make certain that there is no bacterium left.

Cooked ham however has some nutritional benefits to offer to pregnant women and their unborn. It provides their bodies with a good amount of protein, carbohydrates, and fat essential for fetal growth and development. But it is best to be restrictive of the consumption because of the high sodium content in ham which can lead to high blood pressure.

There should be no fear of adding cooked ham to your diet when pregnant, as the risks of toxoplasmosis, listeriosis, and salmonella have been eliminated in the process of treating it with heat. So if you have a craving, rest assured that your safety is guaranteed with cooked ham.

Is It Safe To Eat Other Kinds Of Ham While Pregnant?

Since you now know cooked ham is considered safe for mums to be, you might want to know if you can safely try out other types of ham, so we’ll be listing them out and providing answers as to whether they are safe or not;

You may think that since cooked ham is good to go, the precooked ham should also be safe. Commonly referred to as smoked ham or city ham, precooked ham is the type of ham that has been smoked and cured. Cooking pre-cooked ham for 10-15minutes at 162 degrees celsius makes it safe for pregnant women.

This kind of ham originates from Italy, although it tastes very delicious it should be avoided by expecting mums. This is because parma ham is processed by leaving it in a dark room to air dry rather than treating it with heat. And there’s a high risk of listeriosis and toxoplasmosis when it is consumed by pregnant women.

Deli ham is canned slices of meat and pregnant women must stay away from it, as it has been neither cooked nor precooked, which means there’s a high chance of getting an infection or food poisoning after consuming it.

Wrapping it all up, you now know that you don’t have to give up your favorite dish as it is considered to be very safe and bacteria-free. Cooked ham is a great source of protein and other nutrition that you’ll be needing for your journey.

Precooked ham, however, can be safe depending on how it was prepared. Typically, precooked ham as we started earlier has been cured and later smoked but some extra heating may be needed to make it very safe. 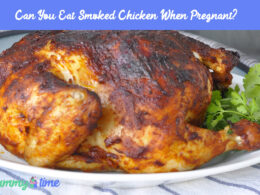 Can You Eat Smoked Chicken When Pregnant?

In This Article Show Tips for Preparing The Perfect Smoked ChickenEating Healthy During Pregnancy; What It EntailsFrequently Asked… 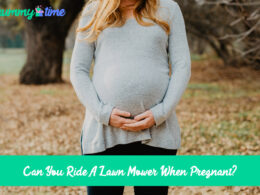 Can You Ride A Lawn Mower When Pregnant?

In This Article Show Is It Safe to Operate The Lawn Mower When Pregnant?5 Things To Watch Out… 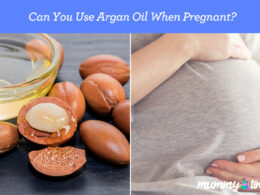 Can You Use Argan Oil When Pregnant?

In This Article Show Does Argan Oil Have Side Effects During Pregnancy? How To Use Argan Oil While… 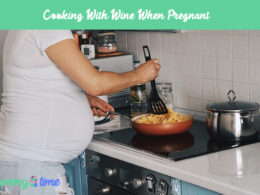 Cooking With Wine When Pregnant: What You Should Know