Is Beeswax Safe For Kids to Eat? (Real Answer)

Beeswax is a naturally occurring wax produced by honeybees in bee hives, it is pretty low in nutrients, but it is an essential ingredient in cosmetics, household products, and oral care. With the many things you can do with beeswax, it can be unclear whether it is safe for kids to eat.

Beeswax has been used since prehistory as the first plastic, lubricant, and waterproofing agent, but this does not mean it is not edible; they are food-grade beeswax, and just like the honeycomb, it is safe for eating.

While beeswax will not provide many nutrients, it is non-toxic and makes an excellent lip balm. The main reason beeswax is considered edible is that it is non-toxic, but it has no high nutritional value, and humans can not digest it properly.

Quick answer: Beeswax is safe for kids above age 1 to eat but not in large quantities. If your kid has bee allergies, do not worry beeswax is 100% allergen free, and although it has no high nutritional value except for the honey inside, it’s safe for your kids. It makes an excellent lip balm but not so much in terms of food.

We all know honey is considered a superfood, packed full of nutrients and vitamins. Still, the same can’t be said for beeswax, which only consists of vitamin A, which can help protect skin cells from environmental irritants. Beeswax is, however, not the same as honeycomb, which is considered healthy. Find out if you can feed beeswax to your kids.

What is Beeswax, And How Is It Made?

Beeswax is a natural wax produced by honey bees and other bees. To understand what beeswax is, it can be defined as the wax that comes from bees and is often mistaken for honeycomb. Beeswax is nonpoisonous and claims it’s filled with vital nutrients, but consuming the whole honeycomb is healthier and more delicious. Also, beeswax is often in the food you eat than you think of.

While beeswax won’t provide you with the nutrients you can get from honey; it is safe to ingest and makes an excellent lip balm. A large amount of beeswax has been claimed to cause blockage of the intestine, but also note that humans have been eating honey beeswax for thousands of years with no effect, so it is decided that it is best consumed in small amounts.

Beeswax is made of 8 wax-producing glands on the abdomen of bees, and each sheet of the wax contains thousands of individual cells. It takes 1,100 cells to make just one grand of wax. Beeswax has no caloric value and is chewy, but eating straight from the honeycomb makes it delicate while giving it an interesting texture.

Another reason you should go ahead and enjoy beeswax is that it contains the purest and freshest type of honey, although the beeswax itself has no flavor of its own and does taste waxy. Many people like the texture of the wax, and although you can be allergic to honey, beeswax consumption can rarely cause any issues.

Is Beeswax Safe For Kids to Eat?

Beeswax is completely safe for consumption; however if you are going to feed your kid, make sure it’s in small amounts, and do not feed raw beeswax or honey to infants under the age of 1. Beeswax may cause blockage of the intestine if a large part of it is swallowed, and those with specific allergies may find the consumption inadvisable. The comb honey is considered a natural delicacy your child might enjoy.

Beeswax might not be high in nutritional value, but it contains pollen, commonly taken as a supplement to strengthen the immune system.

One way you can ensure your kid can safely enjoy beeswax is to bite off a piece, chew, and spit it out, but luckily, eating the honeycomb straight is tastier. Some people like swallowing the wax, but it is gum-like in texture, and it might be best for your kid to spit it out.

Another popular way to enjoy beeswax with your kids is to spread it on a piece of toasted bread. The warmth of the bread should help soften the beeswax then you can enjoy it. You can also enjoy it by topping a cracker with a piece of cheese, then layer it with a chunk of comb honey; your kids should enjoy this tasty combination.

Is it Healthy to Eat The Wax From Honeycomb?

While we won’t entirely recommend your kid eating pure beeswax, just a nibble won’t hurt them.

Beeswax is edible and completely safe; the naturally chewy texture can be enjoyed on its own or added to food or beverages, which is considered a safer option for kids. The honey and the honeycomb’s waxy hexagonal texture are safe and filled with nutrients.

The added chewy texture, known as beeswax, is a bonus unless you have an allergic reaction to it, which you should avoid. It has other surprising uses, like polishing furniture, making candles, lip balm, and body butter lubricating wood.

Beeswax is likely to be in foods more than you think, and frankly, you should feed your kid honeycomb instead of beeswax alone. Studies have shown that consuming raw honey is excellent for the body; honeycomb and beeswax are also expected to be safe.

While raw honey and honeycomb might be tastier, they are particularly harmful to children under 12 months and pregnant women.

There isn’t enough reliable information to prove that beeswax is completely safe for kids, breastfeeding, and pregnant women. So, to stay on the safe side, we recommend avoiding use. 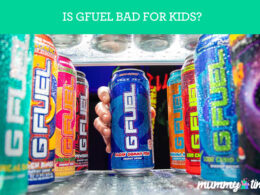 Is G FUEL Bad For Kids? (What You Should Know) 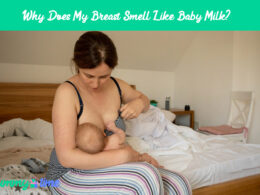 Can You Bake Sculpey Twice? (All You Should Know)

In This Article Show Sculpey, The Polymer Clay ExplainedWhat Sculpey Is Good For?Types of SculpeySculpey and Sculpey AccessoriesHow…

Daughters Pierced Ears Without Permission (What to Do)